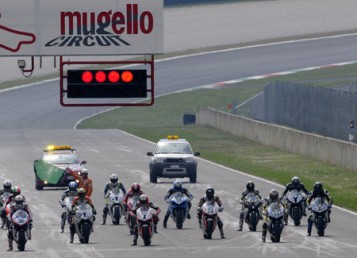 At least in terms of numbers, the Superbike will certainly be the premier class of CIV 2013 – there will be forty-six riders and at least fifteen of them have all it takes to fight for the victory of the Italian title.

About returns, curiosity about Alessandro Valia (ex-champion in the Stock category, he is returning to the tricolored championship after years of absence with Ducati TMF) and curiosity also about another (world) champion, Manuel Poggiali, who is ready to come back to high levels with Grandi Corse Team while among the most experienced riders there will still be two-time champion Norino Brignola (BMW – Motorcycle FM by Gladio Corse).

Among youngest riders, attention to Fabio Massei (Asia Competition), to Lazio rider Eddi La Marra (Ducati – Barni Racing Team), who is debuting in this category, to his teammate Kevin Calia, but also to the always fast Michele Magnoni (GM Racing by Tutapista), to the Suzuki by Davide Fanelli and to the Kawasaki of Andrea Boscoscuro, who is coming back to CIV, too.

The seasons of three “foreigners”, will be interesting to follow, too: the Swedish Chris Bergman with Kawasaki BWG, the Argentine Leandro “Tati” Mercado of the Kawasaki Team Pedercini and especially the French ex-World Superbike and Endurance Sebastien “Seb” Gimbert, making his debut in the Italian championship with the Thevent BMW Racing Team.