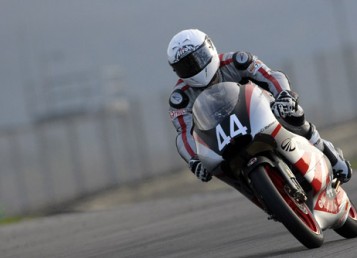 Predictably, winning the first race 125 GP of 2012 was “Indian” to center it,the ex-champion Italian Riccardo Moretti, who raced solo from start to finish. Net supremacy of the binomial Moretti-Mahindra, which has given way to the opponents and that is a candidate as “the crew” to beat this season.
Step on a long run of 2’01 “allowed the Romagna to accumulate more than sixteen seconds ahead in thirteen rounds, demonstrating the excellentquality of the Indian project. “We did a great job all weekend – saysRiccardo – this is a very professional team and I am very happy with them and with the bike, which makes me feel at ease. I have yet many things todiscover this reality, but today was great and I’m really pleased. “Behind him, two young very promising as Lorenzo Dalla Porta and Andrea Mantovani: battled until the last meter but eventually won the day’s first, 14 year old Tuscan Meadow Aprilia rider of Team OR By 2B Racing – Zack M.”The race went well – said Lorenzo – I was on my debut at CIV and I’m really happy with the result although I could not stand before Moretti. I’ll try it for sure in the next occasion. “
In the third place from Ferrara Mantovani (Aprilia), who have tried everything tonab the second place, but eventually had to settle for third place still positive. “I left behind him the last corner and I had the advantage of the wake, but I could not overcome it. But the important thing was to bringhome important points for the grading and the goal I have centered in the middle. “
Behind them, in the top five, it’s after two of the wild-card KTM German Max Enderlein and Florian Alt, then the French Arcielo, the two blue Calgaro and Carpi and the other German Maurischat.