CIV Monza: the show is stronger than rain 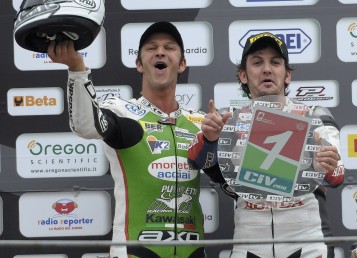 Monza, 2nd May 2010 – The second seasonal round of the Campionato Italiano Velocità has been disputed today afternoon on the historic circuit of Monza today. The rain, falled at intervals on the circuit, influenced the 125 Gp, Superbike, Supersport, Stock 600 and 1000 races but the real show made by overtakings, unexpected moments and fast laps kept on.

SBK: PETRUCCI TRIED IT BUT POLITA MADE IT – The Superbike challenge was red flagged by the race direction after four laps, when light rain started falling on the tack. The race started again after few minutes and the protagonists, riding again on dry asphalt, were the Barni Racing Team rider Alessandro Polita (Ducati n. 53) and Danilo Petrucci member of the Team Pedercini (Kawasaki n. 9). The previous riders pulled away at the beginning of the race and battled it out for the victory till the last lap. Courtesy of a fantastic time of 1’45”565, Polita made it at the penultimate lap as he was able to create a gap on Petrucci in the final laps and earned precious tenths of a second useful for the victory. “We worked very well during the weekend – stated the winner Polita – during the race I managed my advantage and I pushed hard at the end, leaving behind Danilo. I’m very happy because I was seeking this victory”. Third place went to Stefano Cruciani (Ducati n. 12, Barni Racing Team) chased by Marco Borciani and Luca Conforti (Ducati n. 24, Barni Racing Team)”.

125 GP: FIVE CRASHED,SURPRISE FOR GABRIELLI –Six riders battled it out for the victory till the third but one lap, when something unexpected happened: at the Prima Variante corner one of the protagonist of the qualifying and the race crashed, Mattia Tarozzi (Aprilia n. 7, Faenza Racing), and soon after him at the Variante Ascari other four contenders collided: Luigi Morciano (Aprilia n. 100 – JuniorGp Racing Dream), Nicolas Stizza (Aprilia n. 32 – Grillini Bridgestone Team), Hiroki Ono (Rumi 125 Gp Team, n. 76) and Toshimitsu Gondo (Aprilia n. 52 – Grillini Bridgestone Team). in this way they gave the green light to the only rider left Tommaso Gabrielli (Aprilia n. 14 – Gabrielli Racing Team). “My start wasn’t quick, but then I recovered and I reached the front group – stated the 18 years old Tommaso, who clinched the first victory in the Italian 125 Gp  – the others? Everybody knows wet asphalt can be problematic, they risked too much and crashed. I want to thank my team and mechanic, who gave me a perfect bike”. Second spot went to Francesco Mauriello (Aprilia n. 43 – Matteoni Racing), with a gap of over 11 seconds from the winner, whilst the third place went to another 17 – years – old rider Alessandro Giorgi (Aprilia n. 9 – Team VFT Racing).

SUPERSPORT: VIZZIELLO TRICKED MIGLIORATI – Few minutes before the start, Fabien Foret decided not to take part in the race due to a technical decision. So that, the CIV riders challenged to reach the victory. Two riders who disputed the World Supersport Championship in the past, Gianluca Vizziello (Honda n. 45 – Velmotor 2000) and Cristiano Migliorati (Kawasaki n. 3 – Puccetti Racing) made the difference. The two put in a show during the whole race and the podium positions were decided at the Parabolica: Migliorati greatly faced the Ascari corner, followed the rival and overcame him in the straight but Vizziello was the first to enter in the corner thanks to a breaking and a perfect trajectory. “I want to thank the Team that was believing since the beginning in a victory, I dedicate to them the result – stated the rider – I knew I wasn’t going to have the chance to pull away so that I preferred facing Migliorati. Cristiano is the best rival ever and he is like the win..as he gets older he gets stronger”.

Ferruccio Lamborghini (Yamaha n. 28 – Media Action by Prorace) was the author of a perfect recovery and finally ended in third, occuping the last available podium step.

SUPERSTOCK 600: AMAZING RACE, MASSEI WON- As the rain came, the final result of the Stock 600 was influenced. By the race half point, the asphalt was very slipping and this cost dear to some protagonists of the round such as Gregorini, Sancioni, Vargas and overall Lorenzo Zanetti (Yamaha n. 8 – TNT Racing). That latter has been leading the group of fastest riders till that moment. There were three riders battling it out for the victory of the second seasonal round. Fabio Massei (Yamaha n. 34, Team Piellemoto) did it again for the second time and was the first to take the chequered flag; he was able to take advantage from the track that got dry as the end was getting closer. Massei also planned the right trajectory at the Parabolica corner, tricking rivals Boscoscuro and Lombardi who respectively reached the finish line in second and third. “I knew the track was going to get dry so that I was feeling quiet till the final laps – said Fabio – I want to dedicate the victory to the Team, that worked very well and I hope to continue in this way. Boscoscuro? He was great to recover and I want to congratulate with him and Lombardi. In the Parabolica I braked before them to get an advantage so that I made my race”.

Despite he missed the podium because of only few second, Marco Marcheluzzo (Honda n. 211 – New Magic Moda) had positive feelings. Behind him there was Roberto Farinelli (Yamaha n. 4 – Gomme & Service), author of a great performance indeed.

SUPERSTOCK 1000: BADOVINI, AS A CHAMPION – Luca Verdini (Honda n. 23 – Emmebi Team) did a solid start as the red lights blinked off in the Stock 1000, but as he thought he created a gap the contender had to face the two most powerful riders of the category, wild-card Ayrton Badovini and series leader Ivan Goi. Finally the winner of the first three FIM World Cup Superstock 1000 races, Badovini (BMW n. 86 – Team BMW Motorrad Italia), made it. With some laps to go, the wild card improved his rhythm and succeeded by winning with more than a three seconds advantage. “My race pace was better compared to my rivals’ one and after a quiet start, when I was close to the end, I pushed hard prevailing – said today’s winner – courtesy of this victory we will face the World round with confidence”. Today’s second classified was Champion Ivan Goi (Aprilia n. 12 – TRD Racing Cavazzin), who grasped some points in the final standings and now he has a 20 point advantage on Badovini. Behind him there were Domenico Colucci and Danilo Petrucci, fourth and fifth.

ON  TV – After today live broadcast, Sportitalia 2 (channel 226 Sky, DT and live streaming) will broadcast the delayed Stock races, whilst Nuvolari (channel 218 Sky and DT) will transmit the other delayed races on Tuesday and Wednesday from 5pm till 00am.  Moto TV (channel 237 Sky) will broadcast all the races on Tuesday starting from 7pm. The same day, Raisport Più (Digital Terrestrial Television, channel 227 Sky bouquet, Tivù Sat bouquet, and live streaming) will transmit the Monza challenges highlights. 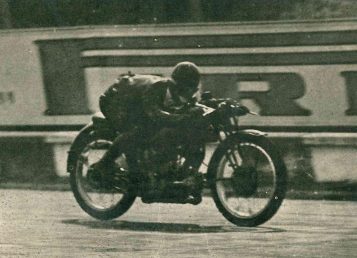