CIV Monza: Lai and Conforti on top in Sbk qualif. 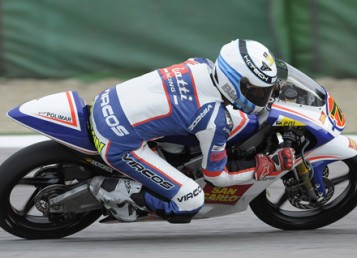 Monza, 28th April 2012 – The Dellorto CIV Round continued today at Monza, where the starting grids for tomorrow’s races were established throughout the afternoon. There are seven race categories and over 140 riders taking part in this third round of the national championship, with tomorrow’s racing kicking off at 11.45am. The sessions were full of surprises today, particularly in Superbike where the two local riders Fabrizio Lai and Luca Conforti (both on a Ducati) closed at the top of the timesheets, ahead of the two favourites for pole, current leaders Matteo Baiocco and Gianluca Nannelli.

QUALIFYING RESULTS – It was Frenchman Sylvain Barrier (BMW) who secured pole position in the Stock 1000. Racing at Monza as a wildcard entry, his best time set yesterday was enough to take pole position. His time, a 1’45”754 (which he almost repeated today with a 1’45”771), was four tenths quicker than his team-mate, Lorenzo Baroni (BMW), also participating as a wildcard this weekend. Behind them, in order, Alessio Velini (BMW – 2R Antonellini by Bargy), Alessio Corradi (Aprilia – Nuova M2) and Swedish wildcard Christoffer Bergman (Kawasaki). Championship leader Goi closed seventh.

Riccard Russo’s best time of yesterday was also enough to set pole in the Stock 600. The Team Italia FMI (Yamaha) stopped the clock at 1’50”560, proving that he deserves his place at the front. His team-mate Luca Vitali closed just eight hundredths of a second behind and he in turn was followed by Luca Oppedisano. The latter, winner of the Coppa Italia 4T in 2011, continues to improve the feeling he has with the category and the Kawasaki of Team Puccetti and did well to finish inside the top three today. The top five is completed by Casalotti (Yamaha – Team Riviera) and Sabatino (Yamaha – Prorace).

A local pairing dominated over in the Superbike category. Milanese rider Fabrizio Lai and Luca Conforti, from Brescia, stood out today; Lai improved on his best time set yesterday by almost two seconds, putting his Ducati, prepared by Team Althea Racing by Echo, on pole with a time of 1’43”680. “I’m really happy with this lap time, achieved at my home track and in front of a home crowd”, said Lai. “How will the race go? I think we’ll see three Ducatis up front, regardless of whether the track is wet or dry.” Three tenths of a second behind him was Team Barni rider Conforti, who did well to close ahead of his team-mate and current champion Matteo Baiocco. Baiocco, third, finished ahead of Ivan Clementi (BMW – Asia Competition) and his closest rival in the standings, Gianluca Nannelli (Ducati – Grandi Corse).

Kevin Calia set the fastest time in Moto3. On a track at which he always performs well, he projected his Honda, prepared by Team Elle2 Ciatti, to the top of the timesheets with a 2’01”309 set yesterday. The winner of the Mugello race, Matteo Ferrari (Honda San Carlo Junior) and Agostino Santoro, Honda rider for Team Imperiali Racing, were over two seconds behind. Rinaldi (Oral M3 – Gabrielli Team Italia) and Valtulini (Honda – Imperiali Racing) complete the top five. In the 125 Gp, the fastest of the riders over the two sessions was Andrea Mantovani (Aprilia), who recorded an impressive 2’01”687 today. One of CIV’s young talents he improved on his best time set yesterday by almost two seconds. Behind him, championship leader Riccardo Moretti (on the Indian Mahindra), the Aprilia of O.R. by 2B Corse Zack M. Ridden by youngster Lorenzo Dalla Porta and the other Aprilia, ridden by Simone Mazzola, for team GT Racing Publisport. Carpi and Calgaro closed fourth and fifth, also on board Aprilia machines.

Stefano Cruciani, riding with team Kawasaki Puccetti Racing, set pole in Supersport thanks to a time of 1’49”348. He took advantage of a strong set up to close four tenths in front of Dino Lombardi (Yamaha – Team Pata by Martini), finally competitive in the national championship and able to finish ahead of team-mate Ilario Dionisi (Honda – Scuderia Improve). The timesheets predict that Mirko Giansanti (Kawasaki) and Lorenzo Segoni (Suzuki), fourth and fifth today, may also be in the mix for a podium finish tomorrow.

The Moto2 category was also very competitive on the fast Monza track today. Current champion Alessandro Andreozzi (Andreozzi R.C.) closed in third place on the overall Moto2-Supersport timesheets and was first in his class thanks to a time of 1’49”810. Three tenths behind him was Danish rider Robbin Harms (Bimota – Edo Racing) and Ferruccio Lamborghini (Quarantaquattro Racing), who will fight it out with Andreozzi for the win tomorrow.

UBBIALI IN THE HALL OF FAME – today saw Carlo Ubbiali enter the CIV Hall Of Fame: the former rider, who is now over 80 years old, was nine times world champion and enters the CIV hall of fame for having won six national 125 titles with MV and Mondial and two 250 titles with MV. He took to the stage at the Pirelli CIVillage, to the sound of applause from the crowd, to receive the official certificate and celebrative painting from Cristiano Migliorati. “Nine world titles and eight national titles? Only a few, but good ones, I can say I’ve won something”, joked the Italian, nicknamed “Volpe” (the Fox) for his winning race tactics. “Thanks to the FMI and the Hall of Fame I was able to come back today and see some friends and the bikes and I’m really happy. In my day, with the 250 bikes here at Monza, we’d do an average of 184km/h… but without tight turns. Today you race much faster but thankfully there is more safety too, thanks to great development from a mechanical point of view.”

PIT-WALK FOR ALL – From about 1pm the public will be able to take part in the PitWalk and experience the atmosphere of the garage just a few minutes before the start of a race. This gives fans the chance to take photographs of the bike and pick up gadgets distributed by the various teams and riders. On Saturday and Sunday (at the Ascari corner) the Demo Ride initiative will give fans the chance to book and carry out a test ride with their favourite bike.

LIVE TV AND INTERNET – On Sunday live coverage will begin at 11.30am on Nuvolari (ch. 144 Sky and Digital Terrestrial) with the Stock 600 and Stock 1000 races while on Sportitalia 2 (ch. 226 Sky and Digital Terrestrial) the Superbike, 125 Gp/Moto3 and Supersport/Moto2 races will kick off from 1.50pm. The Monza round will also have good coverage abroad thanks to Motors TV (with coverage of the event across Europe) and TenSports, the Indian television channel that will broadcast the 125/Moto3 category. The racing is also broadcast on the Internet, in live streaming, on the CIV website (www.civ.tv) in collaboration with Sportube.tv.

SCHEDULE – Tomorrow racing will get underway with the Stock 600 at 11.45, followed by the other six categories. The final Supersport-Moto2 race will start at 3.40pm. Combined grandstand-paddock tickets cost 19 euro (or 15 euros for the under 18’s and FMI cardholders).