CIV Monza: ecxitement across all classes 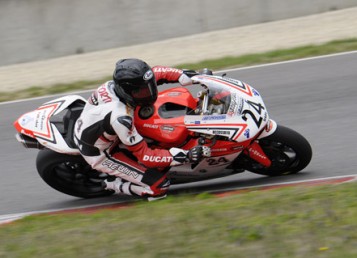 Monza, 29th April 2012 – The Dellorto DIV round, the third event of the 2012 Campionato Italiano Velocità, took place today at the Monza circuit. French victory in the Stock 1000 for wildcard Sylvain Barrier, Franco Morbidelli triumphed in the Stock 600 while Dino Lombardi scored his first win in Supersport. Ferruccio Lamborghini won a solitary Moto2 race, Tuscan rider Lorenzo Dalla Porta made the 125 Gp his own and Kevin Calia took the Moto3 win. ‘Home’ rider Luca Conforti, from Brescia, recovered to win the Superbike race and put himself back in the game as far as the general standings are concerned.

STOCK 1000: BARRIER DOMINATES – Frenchman Sylvain Barrier, BMW rider and CIV wildcard, took advantage of the work done in qualifying to lead the race from beginning to end, which bodes extremely well for next week’s European championship round taking place at the same track. Second place went to Simone Saltarelli; riding the Ducati 1098 for Team Barni he made a good recovery during the race to find himself at the front of the chasing group, and was able to cross the finish line in eventual second position. Saltarelli closes the gap on Ivan Goi by four precious points – the latter did well to defend third place despite experiencing a technical problem on the last lap. Lorenzo Baroni (wildcard on the BMW), Alessio Velini (BMW – 2R Antonellini by Bargy) and Swedish rider Christoffer Bergman (wild-card su Kawasaki) all contributed to what was a thrilling race, closing in that order.

STOCK 600: MORBIDELLI FIGHTS BACK – thanks to a well-chosen tyre, Franco Morbidelli was able to take first place today on board his Yamaha, prepared by the RCGM Faber Team. The Tavullia resident, whose family has racing in its blood, started out on slick tyres on what was still a damp track and, though cautious in the first laps, he was able to make up a 12 second gap to pass Riccardo Russo in the final lap and thus celebrate his first win. Riccardo Russo, riding for Team Italia FMI (Yamaha) made a very strong start and aimed to build as much of an advantage as possible in the initial phase before managing that gap in the latter stages, on rain tyres, but he was unable to do so. In third place, seventeen seconds behind, was Manuel Grandi, followed by Mattia Cassani and Roberto Mercandelli, who closed in fourth and fifth respectively, on Yamaha machines.

SUPERBIKE: CONFORTI BACK ON TOP – After two rather flat races, many expected “Lion” Luca Conforti to roar at his home track today. That he did, before loudly celebrating his race win after having made a fantastic recovery. The Ducati rider (Team Barni) was able to make up the ground he lost at the start, setting some fast laps and breaking away from Fabrizio Lai, who led until three laps from the end. Passing Lai on the inside through the Parabolica allowed him to take the lead and fight for the win against his team-mate Matteo Baiocco. Baiocco, in turn, can smile despite having missed out on the win today as he now leads in the championship standings with an advantage of seven points over Nannelli. After three pole postions, third place today went to another local rider Fabrizio Lai (Althea Racing by Echo). Gianluca Nannelli, riding the Ducati for Team Grandi Corse closed fourth and now lies in second place in the general standings. Fifth place went to Lorenzo Mauri (Ducati – M. Motocorsa).

MOTO3: CALIA TAKES IT – Kevin Calia showed that he had an extra gear with respect to his rivals. Riding a Honda for Team Elle2 Ciatti, he proved to be back on top form in the Moto3 as he took his first win of the 2012 season. A fast start put Kevin straight up into the leading group which would quickly be reduced to the group that would fight for the win. His impressive pace made all the difference, allowing him to take a long-awaited and well-deserved win. Behind him, the only rider able to keep up was Agostino Santoro (Team Imperiali – Honda), from Puglia, who closed just over a second behind, showing significant improvement with the passing of each round. The final podium spot went to Matteo Ferrari (Honda – San Carlo Junior). Less assertive than he was during the first two races of the season, he was nonetheless able to bring home sixteen all-important championship points. Stefano Valtulini and Michael Ruben Rinaldi finished in fourth and fifth positions respectively.

125 GP: THE FIRST FOR LORENZO DALLA PORTA – A win and command of the championship classification. Today couldn’t have ended any better for Lorenzo Dalla Porta. The young Tuscan rider (Team O.R. by 2B Corse – Zack M) did the job in today’s third round; the Aprilia rider made a good start and was able to break away from almost all of the chasing pack. The only one to stick with the 14-year old was Cristiano Carpi, also 14, who was also celebrating today.  He did all he could do catch Dalla Porta but in the end had to settle for second place. Third place gave Indian rider Kumar Sarath (Mahindra Racing) his first CIV podium (Mantovani was disqualified post-race) and Sarath, in turn, closed ahead of Alex Calgaro (Honda). Roman rider Simone Mazzola was forced to retire due to a technical problem.

SUPERSPORT: THRILLING WIN FOR LOMBARDI – Four riders took part in a very closely-fought battle today, namely current champion Ilario Dionisi, the two Kawasaki Puccetti Racing riders, Mirko Giansanti and Stefano Cruciani, and Dino Lombardi. It was the latter, in the end, who celebrated his first 600 win. Unlucky up until now, the Team Pata by Martini rider put in a great performance in the final phase, taking advantage of a technical issue that caused Cruciani’s bike to slow to cross the line first. Current champion Dionisi (Honda – Scuderia Improve) tried everything he could to win. He missed out by a whisper but thanks to the twenty points pocketed today he returns to the top of the general standings. Mirko Giansanti made a return to the podium with his Kawasaki, in third. A great fourth place finish for young Marco Faccani who was able to fight off Mattia Tarozzi, fifth.

MOTO2: LAMBORGHINI CELEBRATES – The Moto2 race was won today by Ferruccio Lamborghini (Quarantaquattro Racing), the only rider to cross the line after Danish rider Robbin Harms was forced to retire due to technical problems and current champion Alessandro Andreozzi (Andreozzi R.C.) crashed. With this result, Lamborghini now leads the championship standings.

DOUBLE HEADER AT MUGELLO – the next event on the CIV calendar will take place at Mugello on the 23rd and 24th June and will consist of two rounds, with Round 4 of the season taking place on the Saturday and Round 5 the following day – an event not to be missed.