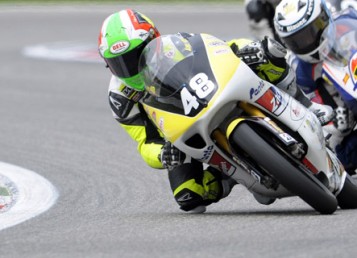 Misano Adriatico, 29th July 2012 – The seventh and penultimate round of the 2012 Italian CIV championship took place today at the Misano World Circuit Marco Simoncelli. By the end of the day. three national titles had been awarded, in addition to that secured by Lamborghini in the Moto2 class yesterday.

SUPERBIKE: RACE AND TITLE WINS FOR BAIOCCO – With a 47-point advantage, winning the title was just a formality for Matteo Baiocco today. Riding the Ducati for Team Barni, he had no close rivals in this seventh race of the season, and once again demonstrated his superiority. He crossed the line almost three seconds ahead of his nearest rival and this result meant that he could celebrate a second consecutive title win. Behind him was Fabrizio Lai (Ducati – Althea Racing by Echo) who returned to the podium today at the end of a great race in which he made a final push to catch and pass Ivan Clementi (a solid third with the BMW of team Asia Competition), demonstrating great strength.

125 GP: THE RACE GOES TO POPOV, THE TITLE TO DALLA PORTA – Miroslav Popov did his best to help his Mahindra team-mate Riccardo Moretti but in the end it was in vain. Having slowed to allow Moretti to pass him in yetsterday’s race, today the Czech rider took the win. He closed over two seconds in front of Lorenzo Dalla Porta, taking a very well deserved win having led the race from start to finish. Popov is happy but Dalla Porta even more so, as he takes the national 125 Gp title today. Riding for Aprilia O.R. by 2B Corse Zack M Dalla Porta rode a perfect race: he knew he had to manage his championship advantage and keep an eye out for moretti and that’s exactly what he did, settling for second place without risking a battle with Popov for the win. The final podium spot went to Moretti, who did not have the pace to attack Dalla Porta today.

SUPERSPORT: DIONISI CHAMP ONCE MORE – Pole, the double win and the Italian title. Ilario Dionisi was dreaming of this and it came true for him today. The 28-year old from Lazio could have simply done enough to snatch the title from his closest rival, Mirko Giansanti, but instead he wanted to prove once again that he is the fastest. He set off at an incredible pace together with Roberto Tamburini but the latter crashed a few laps into the race when he tried to pass Dionisi. Roberto rejoined and closed in eventual sixth place. From that moment on rider no. 57 ran a solitary race and took a comfortable win. Behind him there was a great battle for second between Stefano Cruciani and Vladimir Leonov. In the end it was the Italian, riding for Kawasaki Puccetti Racing, who closed in second, only eight hundredths of a second in front of the talented Russian, on the Yamaha (Team Yakhnich MS). In Moto2 newly crowned champion Ferruccio Lamborghini (Quarantaquattro Racing) won once again, followed across the line today by Christopher Gobbi, second.

MOTO3: ANTONELLI WINS, CALIA EXTENDS HIS LEAD – Another impressive race win for Niccolò Antonelli. The Honda rider repeated yesterday’s performance, though crossing the line with an even greater advantage (19 seconds) over his rivals. He didn’t get away too well but once he was able to break away from Popov e Riins, who were ahead of him in the opening stages, he was able to really make the difference. A great demonstration of strength by the current national 125 champion who has shown that he is increasingly at ease in the Moto3 class, which bodes well for the upcoming world round at Misano in September. There was a six-way fight behind him, eventually won by Kevin Calia who crossed the line in second one tenth ahead of wildcard Alex Riins (Honda), who did well to finish on the podium again. Thanks to his second place finish, Calia, from Imola and riding for team Honda Elle 2 Ciatti, increases his championship advantage to 12 points over Ferrari, who today finished fourth.

STOCK 600: DOUBLE FOR MORBIDELLI – Franco Morbidelli (Yamaha – Bike Service Racing Team) did the double but had to really fight hard to get the best of his four closest rivals today. It was a fantastic race, with much overtaking, that was decided on the very last lap, when Morbidelli attacked Sabatino. Gennaro Sabatino (Yamaha – Prorace Squadra Corse) had to settle for second though did everything he could to try to win. He was nevertheless satisfied with his second podium of the weekend. Third went to Nicola J. Morrentino (Yamaha – Elle2 Ciatti) who did well to make up lost ground in the final stages, having dropped back when he tried and failed to pass Nocco, fifth. Fourth in today’s race, championship leader Riccardo Russo did not secure the title, and leaves Misano just three points shy of success. The scene is therefore set for an epic battle between Russo and Morbidelli at Vallelunga on 14th October.

STOCK 1000: FIRST WIN FOR MAGNONI – After two second place finishes scored at Mugello and yesterday’s DNF, Michele Magnoni finally took his first win of the 2012 season today. A wild-card entry at Misano on board the BMW, he quickly got away from the competition and, thanks to a strong pace, built an early advantage over his three closest rivals Goi, Velini and Corradi. The last rider to give up the fight was Corradi (Aprilia), who tried to stick with the leader but was caught and passed by the other two in the final stages, missing out on the podium by just three tenths. The other podium spots thus went to Goi and Velini, who got into a duel in the final lap as they fought for important championship points. The riders sitting in first and second place in the championship finished in that order, with Ivan Goi (Ducati – Team Barni) doing well to put yesteady’s DNF behind him, closing in second and increasing his championship lead to 7 points over  Velini.

The eighth and final round of the CIV championship will take place on the 14th October at the Vallelunga circuit.