CIV MISANO: THE PRESENTATION OF THE WEEKEND 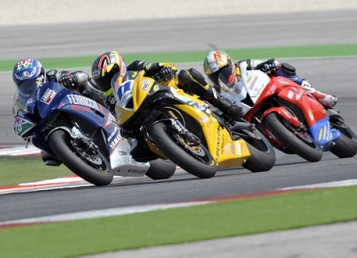 The sixth and penultimate seasonal round of the 2010 Campionato Italiano Velocità will kick off the coming weekend on the “Misano World Circuit”.

SS: HOME CHALLENGE – At Misano there is going to be an amazing challenge between two home riders: Ferruccio Lamborghini (Yamaha – Media Action by Pro Race) and Roberto Tamburini (Yamaha – Bike Service Racing Team). The two riders, coming from the same region, are respectively in first and second in the Championship, divided by a 10-point gap. Anyhow, they will also have to face three veterans of the World Championship Ilario Dionisi (Honda – Scuderia Improve), Cristiano Migliorati (Kawasaki – Puccetti Racing) and Gianluca Vizziello (Honda – Velmotor 2000), who are chasing them in the standings. “I will try to attack Tamburini at Misano in order to get some extra points – stated Lamborghini – after the Moto2 experience in the World Championship I feel more prepared and I don’t hide the fact that I want to win the Title”. Tamburini has the same aim and he is recovering after the crash suffered at Silverstone whilst he was disputing a round of the World Championship as wild card. “The shoulder is still hurting a little bit – said Roberto – but I’ll do my best to put pressure on Ferruccio. The target is the victory”.

STK 600: MASSEI COULD GRASP THE VICTORY – The Stock 600 as well has a leading rider, who could come back home from Misano with the crown of the Italian Championship: he is Fabio Massei (Yamaha – Piellemoto), who has a 36-point advantage over Lorenzo Zanetti (Yamaha – TNT Racing). Anyway, it will be better keeping an eye also on Lombardi (Yamaha – Martini Corse) and Fanelli (Honda – All Service System by QDP), who are third and fourth classified in the standings, and on Roberto Farinelli (Yamaha – Team Gomme & Service).

STK 1000: GOI AND VERDINI INVOLVED IN A DUEL – The outcome of the Stock 1000 is still uncertain, as Ivan Goi (Aprilia – Ecodem Racing) is leading just with a 5-point gap over Luca Verdini (Honda – Emmebi Team). Among the podium contenders there will be the winner of the last round, Matteo Baiocco (Kawasaki – Pedercini Team) and Danilo Dell’Omo (Suzuki – Suriano Racing). Even the performances of Muzio, Colucci, Della Ceca, Alfonsi and Giugliano will be worthy of being followed.

SUPERBIKE: THREE FELLOWS SEEKING VICTORY – The three Ducati riders battling it out for the Title are all challenging for the same team, Barni Racing. They are Alessandro Polita, Stefano Cruciani and Luca Conforti who are respectively in the first three positions of the standings, divided just by 24 points. Among the young promising riders, an eye must be kept on Danilo Petrucci (Kawasaki – Pedercini Team) and on Federico Sandi (Aprilia – Gabrielli Racing), winner of the last appointment.

TV LIVE BROADCAST – The Superbike, 125 Gp and Supersport challenges will be live broadcasted on Sunday from 1:50pm on Sportitalia 2 (channel 226 Sky, DT and live streaming). The races of the two Stock categories, 600 and 1000 will be broadcasted from 4:35pm on Nuvolari (channel 218 Sky and DT).

CIV RADIO – Radio Bruno, the official radio station of the round, will follow the appointment during the days preceding the race and will suggest a nice challenge to its listeners: free tickets for Sunday’s race will be at stake as well as a track lap on the two-seater Yamaha.

INTERNET AND MOBILE – The Misano round can be followed also through the official web site of the Championship, www.civ.tv: news, exclusive interviews, photos, videos and much more. It is possible subscribing to the Newsletter (http://www.civ.tv/newsletter.asp) in order to be updated on all the activities concerning the Road Racing events. Furthermore, through the Feed Rss (http://feeds.feedburner.com/civ), it is possible automatically receiving, every 24 hours, the website news at your inbox. The Civ.tv news are also on mobile phone, check it out at www.civ.tv/mobile.

TIMETABLES, TICKETS AND PRICES – On Friday, the free practices will get underway from 9:00am, whilst the qualifying will take place at the same time on Saturday. All the races will be disputed on Sunday starting from 2:00pm. The ticket to enter at Sunday’s races will cost 20 euros (reduced ticket to 15 euros for women, people under 18 and FMI card holders, free entrance for children under 14).)