CIV Misano round 6: “double” for all 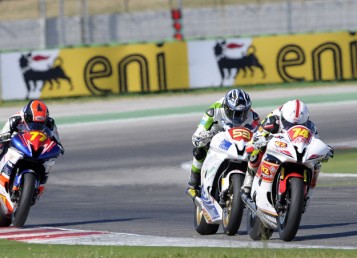 Misano Adriatico, June 16th, 2013 – This afternoon the Misano World Circuit “Marco Simoncelli”  hosted the four races valid for the sixth round of the Italian Championship on Track: Moto3, Stock 600, Supersport and Superbike.

SUPERBIKE – LA MARRA IN SOLITARY – Even today, Eddi La Marra was able to make a difference. The rider from Lazio, who races with Ducati of Barni Racing Team, got a good start from pole position and in the early stages he immediately created a gap on all opponents. Except for one, Michele Magnoni, the only one who yesterday was able to fight for victory with La Marra. The rider from Marche, who rides BMW – GM Racing Team by Tutapista, today tried again to keep up to La Marra but a mistake did not allow him to play for the win: he finished wide at the braking at “Quercia” corner, during the third lap, which created a gap with his rival. Since then, Eddi rode a lonely ride, celebrating his win at the checkered flag with his team. This triumph allows him to extend his  advantage on Mercado, who now is fourth in general standing, 27 points behind. Magnoni, after risking a crash, rejoined in third place and after passing Ivan Goi with fast recovery, maintained his position until the end of the race, finishing with a delay of 0″382 from the winner. “I made a mistake but in the end I managed to recover at least the second place – Michele said – which means 20 more points in the rankings. Congratulations to Eddi”.   Third position for Ivan Goi (with a delay of 3 “888), who is back again on the third step of the podium after the “double” third place in Vallelunga. The rider of Barni Racing Team Ducati was good at finishing in front of Leandro Mercado (Kawasaki – Team Pedercini), who finished at 12″320 from the leader. Good fifth position for the newcomer in Superbike Kevin Calia (Ducati – Barni Racing Team), who finished in front of Fabrizio Lai and Gianluca Vizziello. In the top ten also Castellarin, Saltarelli and Della Ceca.

MOTO 3 – DOUBLE VICTORY FOR LOCATELLI – Like yesterday, today there were five riders fighting for the victory of Moto3 until the last meter. A beautiful, spectacular battle, especially in the final laps, where it was important to maintain the positions for the final straight. After several twists and turns,  it was the Lombard rider Andrea Locatelli (Mahindra Racing) who brought home 25 valuable points for the championship, doubling the the great victory of yesterday. He was very good at facing the “Carro” corner in the best possible way, he was in the lead in the final two corners and kept the position. “It was important to do well here and I managed to bring home the best result – Andrea says -. Two fantastic races, and now let’s think about the next round, in Imola”. One of his strongest opponents was his teammate, the rider from Romagna Ruben Michael Rinaldi, who led the group for most of the race but, in the last corner before the straight crashed without consequences, losing grip on the front in braking, while attempting to overtake Locatelli. Second place for rider Stefano Manzi (Twelve Racing, at 0 “498), from Romagna too, who confirmed to be very competitive and was back on the podium after his third place yesterday. Thanks to his recent positive results, newcomer Manzi is now fourth in the overall standings in his first season in CIV. Behind him, the rider from Marche Luca Marini (Twelve Racing Teams), back on the podium with a third place after missing it in the race of yesterday. Luca was able to beat by a whisker at the finish line Stefano Valtulini (Honda – Five Racing AX52). Fifth position for Michael Coletti (Honda – Team Minimoto), followed by Caravella, Chapel, Mazzola, Rinaldi and Bastianini.

STOCK 600 – SABATINO SMILING – The Stock 600 race was a fight among three riders. The contenders up to the checkered flag were Gennaro Sabatino, Stefano Casalotti and Nicholas J. Morrentino. The latter, on Yamaha of Mottini Racing Team, was the fastest of all, and crossed the finish line in front of Sabatino (Yamaha) and Casalotti (Yamaha CDM – RS). At the post-race inspection, however, the rider from Campania was then ousted from the ranking and the victory went to Sabatino, coming from the same ragion, who was good enough for a second win after the triumph of yesterday, earning the lead in the general standing. Second position for Stefano Casalotti, doog at confirming the place of honour of yesterday and at proving once again he is among the top riders of the category. In third position, the former leader of the championship, Andrea Tucci: the rider from Lombardy, on Honda, got the position closing only three tenths ahead Suzuki of Team Suriano by Falaschi, rode by Luca Vitali from Romagna. In the top five we find another home rider, Filippo Benini (Yamaha – GAS Racing Team), followed by Oppedisano, Spedale, Tatasciore, Caricasulo and Mercandelli.

SUPERSPORT – FACCANI WINS AGAIN – Marco Faccani won also the sixth round in his home track Misano. After the splendid triumph of yesterday, the rider of Honda repeated his performance today with another victory which was even more imperative. After a good start, he immediately took a consistent lead thanks to his pace, which was unsustainable for his opponents. “Winning here twice is a great satisfaction – Marco said – We worked well all weekend and I must thank the team for their support.” After 18 perfect laps, Faccani crossed the finish line and took home the first two wins of his career in CIV, relegating the convalescent rider Cruciani in the place of honor with a delay of 3 “881. The rider from Marches, on the Kawasaki of Puccetti Racing Team, failed to keep behind Faccani but at the the finish line he preceeded for eight hundredths of a second his teammate Mirko Giansanti, who was good at getting back on the podium after the fourth place of yesterday. With the second position, Cruciani remains firmly in the lead of the championship, also thanks to the mistake of the defending champion Ilario Dionisi (Honda – Scuderia Improve), who crashed after the first half of the race while  attempting to keep contact with his rival Cruciani, who had just passed him. In the top five also Giuliano Gregorini (Yamaha – Team Rosso e Nero) who recovers after the “zero” of yesterday and Gabriele Cottini (Honda – Scuderia Improve). In the top ten also Moretti, Paoloni, Spigariol, Alzate and Vigilucci.   The next round is for July 28th weekend in Imola: the “Enzo and Dino Ferrari” track will host the seventh and eighth round of the season.