CIV Misano: Moto3 with the RSF 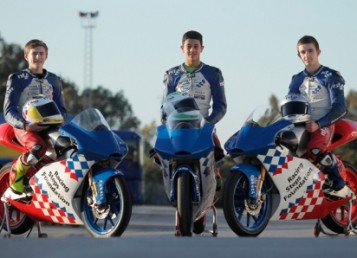 The UK KRP team-mates – who made their debuts in the Italian series on Aprilia 125GP bikes at Mugello last July – will compete this time round in the Moto3 category aboard their new KRP M3-01 Honda prototypes.

The riders are slotting in the double header at the recently renamed Romagna track in between rounds of the Spanish Moto3 championship.

McPhee and Rogers, who won wildcards to the British round of the Moto3 World Championship at Silverstone in July, currently lie sixth and 14th in the CEV rider standings.

Ryan, the 2011 British 125GP Vice-Champion, is currently 18th in the Spanish series in his debut year.

“Ideally we would love to participate in more rounds in Italy but unfortunately their busy schedules make it very difficult.

“Clearly, the more top-class competition they face, the more they improve their race craft and consistency. So we are looking to see if further rounds will be possible as the season progresses.

“So far the lads have endured mixed fortunes in Spain but they have bikes that are capable of running at the front so hopefully they will produce the kind of results at Misano that we know they are capable of.”

The Racing Steps Foundation is a private, not-for-profit fund that provides and finances competition and personal performance development programmes for an elite group of young British racing drivers and motorcycle racers.

The backing is provided for those who have the skills and determination to climb to the top of the international motorsports ladder but who lack the funds and mentoring needed.

It was set up in 2007 and in 2012 is supporting the following elite group of drivers and riders: