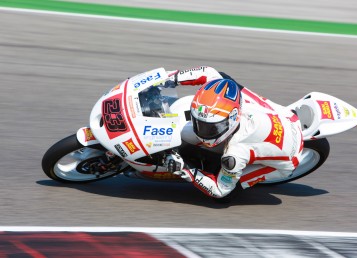 Misano Adriatico, 27th July 2012 –the first official qualifying sessions of the sixth and seventh rounds of the Italian CIV championship took place today at an extremely hot Misano World Circuit Marco Simoncelli. This is the second double-header event of the season, with races taking place on both Saturday and Sunday, meaning that the first titles of 2012 may already be awarded this weekend.

FIRST QUALIFYING RESULTS – in the Stock 600 category, today’s protagonist was Franco Morbidelli. Riding the Yamaha for the Bike Service Racing Team, he recorded a 1’41”177 which was enough to secure provisional pole ahead of Gennaro Sabatino (two tenths off the pace on board his Yamaha) and championship leader Riccardo Russo (Yamaha). Salvatori and Casalotti closed fourth and fifth. The Stock 1000 qualifying session went to wildcard Michele Magnoni. The BMW rider, thanks to a fast lap of 1’39”178, kept Fabrizio Perotti (BMW) behind him, albeit by only a fraction of a second. Also closing in the top five were Velini, Goi and Muzio. Matteo Baiocco (Ducati – Team Barni) consolidated his position as leader of the Superbike category. Current champion Baiocco concluded the session in first place with a time of 1’37”676, though this was only two hundredths of a second ahead of Ivan Clementi (BMW) who may have missed out on provisional pole by a fraction but nevertheless proved to be a frontrunner in both of today’s sessions. The three Ducatis’ of Conforti, Nannelli and Lai rounded off the top five. Supersport speaks Russian with provisional pole for Vladimir Leonov. Riding the Yamaha for Team Yacknich MS he closed with a best of 1’39”310, three tenths quicker than category leader Ilario Dionisi (Honda). Further back were Tamburini, Gregorini and Cruciani. The fastest lap of the Moto2 was recorded by Ferruccio Lamborghini, finishing ahead of Christopher Gobbi. In the 125 Gp, Czech rider Miroslav Popov stopped the clock at 1’46”122 and secured ‘virtual’ pole on board the Mahindra. Behind him were category leader Lorenzo Dalla Porta (Aprilia) and, in order, Mantovani, Carpi and Mazzola.

ANTONELLI AND RIINS, A WORLD CLASS FIGHT – the best Moto3 time was recorded by wildcard Niccolò Antonelli (Honda). The current Italian champion registered an impressive 1’45”583 which was eight tenths faster than that recorded by another ‘one-event’ guest Alex Riins (Honda) and nine tenths quicker than the third wildcard, British rider John McPhee (Honda). Fourth place for the category leader Kevin Calia (Honda), followed by his closest rival Matteo Ferrari (Honda). Expectations are high for the battle between two of the main players of the world Moto3 championship, Antonelli and Riins. “It’s great to be here at Misano – says Niccolò – I had an emotional time of it here in CIV  last season and so am really pleased to have the chance to take part in this race. The level is really high and though Romano and I are no longer here, there is still a group of very strong riders. My first season in the world championship? I’m happy with how it’s going. At the start I thought it would be good to be in the top fifteen, then I saw it was possible to get into the top ten, then the top five and then I started aiming for the podium.” Riins also has positive things to say about the CIV and doesn’t shy away from stating his objectives. “It’s the first time I’m racing in the CIV and at Misano – states Riins – I really like the track and this is an important test for me as the world championship will race here in September. There is a very high level of competition and I cannot see any differences between the CIV and the Spanish CEV championship. I’m mainly here to gain experience at this track, but I’d also like to win.”

CORSI AND GIUGLIANO: THE PRODIGAL SONS RETURN HOME – both Davide Giugliano and Simone Corsi put in appearances at Misano today. The talented Althea Racing rider, taking part in his debut World Superbike season, paid a visit to the CIV to see old friends before travelling to Silverstone, where he will participate in round ten of the championship next weekend. “I’ve been following the season with interest, especially the category dearest to me, the Stock 1000 (in 2008 he finished second in the category behind Pirro), which is very hard-fought and respects the tradition of this class. Silverstone? Every time I make predictions things go wrong so I’ll just say that… I need to grow.” Simone Corsi also dropped in at Misano. The Roman rider, now competing in the Moto2 championship with Team Ioda Racing, didn’t want to miss the chance to revisit the CIV paddock after a few years away. “The CIV? It has launched many talents. I’m thinking of Fenati, and Antonelli but also many other strong young riders that I have seen on track today, in the 125 and Moto3 classes. My 2012 season? I can’t wait to run the final races, because I want to achieve some more important results that can help me when it comes to the 2013 season. Perhaps you’ll find me taking part in a CIV race next year, as preparation for the world round…”

CIV ON TV AND INTERNET – On Sunday live TV coverage will began at 11.30am on Nuvolari (ch. 144 Sky and Digital Terrestrial) with the Stock 600 and Stock 1000 races while on Sportitalia 2 (ch. 226 Sky and Digital Terrestrial) the Superbike, 125 Gp/Moto3 and Supersport/Moto2 races will kick off from 1.50pm. The racing is also broadcast on the Internet, in live streaming on the CIV website (www.civ.tv)  in collaboration with Sportube.tv.

USEFUL INFO – Second official qualifying will take place tomorrow morning between 10am and 12.50pm. After a short break, round 6 racing will commence, with races taking place between 2.30pm and 5.30pm. The seventh round will get underway on Sunday, starting with the Stock 600 at 11.45am, followed by the other races. A combined field-paddock ticket for tomorrow’s sixth round will cost 10 euro (reduced rate 8 euro for under 18s, women and FMI card-holders, free entry for under 14s) while the same ticket for Sunday’s seventh round will cost 15 euros (reduced rate 10 euro).  There is a combined Saturday/Sunday ticket available at a cost of 20 euro (reduced rate 15 euro).