CIV Imola, Round 8: “double” only for La Marra 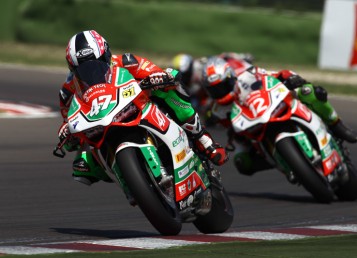 CIV, 8th ROUND: DOUBLE WIN ONLY FOR LA MARRA

Imola, July 28th, 2013 – Eighth round of CIV, the Italian Championship of Motorcyclism, today at the circuit “Enzo & Dino Ferrari” of Imola.

SUPERBIKE: LA MARRA WINS AGAIN – They did the good and the bad weather today: Eddi La Marra and Ivan Goi. The two team-mates of Ducati Barni Racing Team were the absolute rulers of this eighth round of the Superbike (which was preceded on the grid by a minute’s silence in memory of Andrea Antonelli, who died last week at the Circuit of Moscow), and both raced for victory until the last meter. La Marra, winner of the last six races, started well from the pole position and went to the lead from the beginning. The first who tried to keep his pace was the Spaniard Javier Fores (Ducati), but due to a technical problem he lost ground in the final stages and had to settle for another good third place at 10″943 from the first. Meanwhile Goi came back strong from the rear. The rider from Mantua got rid of Alessandro Polita (the rider from Marches was wild-card on a Ducati and finished fourth just a few tenths off his team-mate Fores), then he overtook the Spanish rider and then did everything he could to win – in the last lap he tried twice, at the Rivazza and Variante Bassa corners, but he finished “long” and left the door open for La Marra to go to the lead on both occasions. The rider from Lazio (winner for 0″308) is now 48 points ahead in rankings, also due to the fifth place of his first rival, Leandro Mercado (Kawasaki – Team Pedercini).

MOTO3 – LOCATELLI WINS THE SPRINT FINISH – Really good weekend for Mahindra Racing: after Rinaldi’s victory yesterday, this afternoon his team mate Andrea Locatelli managed to climb the top step of the podium. The rider from Bergamo, leader of the general standing, this time did not miss the victory thanks to a splendid comeback. After the start, the early phase of the race saw 15 pilots form the leading group while in the final laps only three riders were in the lead – Andrea Locatelli, Luca Marini and Michael Ruben Rinaldi. The main protagonist was the former, who first overtook his teammate and then passed the rider from Pesaro Marini (Twelve Racing Team), defending himself in a perfect way from the attacks of the two rivals,  both at Rivazza and Variante Bassa corners. Fourth victory for Locatelli, who now leads the general standing with 23 points on Luca Marini. The rider from Tavullia finished second today at 0 “380, he is second in the rankings, too and proved again he can ride among the protagonists, although he remains once again winless: up to now, in fact, he collected six podiums, scoring three second and three third places. About third position, in this race it belongs to Rinaldi, from Romagna: after yesterday’s win, Michael tried to go ahead but when he realized it would be impossible to beat Locatelli he preferred to gain 16 important points for the ranking, where now he is third, 32 points behind the leader. In the top five of today also finished Andrea Migno and Michael Coletti, while Dalla Porta’s crash, also involved Petrarca, Di Giannantonio and Ryde.

STOCK 600: NOCCO CAN SMILE – The match between the two wild-card Franco Morbidelli and Alessandro Nocco ends 1-1 tie. Each of the two teammates, riding for Puccetti Racing Team supported by the IMF, scored one win in Imola: after the wonderful victory scored yesterday by Morbidelli, this afternoon the rider from Puglia Nocco won a race that since from the first curve turned out to be a matter between them. They passed each other several times but in the end it was Alessandro Nocco to win, thanks to a perfect final lap which consented him to keep behind his team mate and take home a victory that keeps morale high for the next round of the European championship, scheduled at Silverstone.
Morbidelli, who finished 0 “395 behind, was good to settle for a race at the top while the third place went to Nicholas J. Morrentino. Since the start, the rider from Campania had understood he did not have the pace of the two leaders and then he ran a smart race, thinking about the overall standings (wild-cards do not gain points, so the rider of  Yamaha Team Mottini Racing has gained 25 points). He maintained a good advantage over his rivals until the checkered flag, where he finished with 12 “350 of delay from the winner. Luca Vitali tried to catch the podium until the last meter: on the Suzuki by Suriano Team, the rider from Romagna finished fourth at the end of a good comeback, which saw him overtake even the ranking leader Andrea Tucci (Honda). The Lombard rider scored a fifth position today, and now Morrentino is just 10 points behind him with 50 points still available!

SUPERSPORT: FACCANI WINS AND HOPES – He rode a perfect race and now he can keep alive title hopes. Marco Faccani (Honda) won the eighth round bending resistance of all opponents and launching a strong signal to Stefano Cruciani (Kawasaki – Puccetti Racing). To tell the truth, the absolute protagonist for the first half of the race was Riccardo Russo (Kawasaki – Puccetti Racing), who started strong, took the lead since the first corner but had to retire due to a technical problem.
So Faccani took the lead, defending the first place by Mathew Scholtz’s attacks. He won with 3 “872 of advantage, and now in general standings he is 27 points behind the leader Cruciani. Second place today for South African Scholtz: after the third place scored yesterday, the rider of Suzuki Suriano Team has proved once again he is able to run to the top with a GSX-R in great shape. Third position, at 10 “030, for Cruciani, who up the end managed to resist the attacks of his teammate Mirko Giansanti, fourth at the arrival. In fifth position, the defending champion Ilario Dionisi, now out of contention for the title.

SEE YOU IN SEPTEMBER – The next and decisive round of the CIV is scheduled for September 21-22th, for the ninth and tenth rounds, on the Tuscan circuit of Mugello.