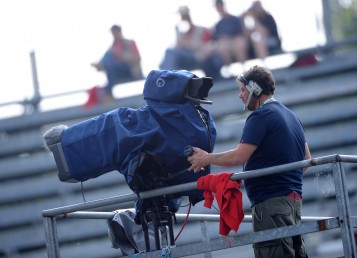 Also for 2013, the Italian Championship will rely on live television.

For each of the five rounds on the calendar, the scheduled races on Sunday will be broadcast in full “live” by AutomotoTV in Italy (channel 139 on Sky). In addition to the CIV, the channel dedicated to the engines will give space to other events of the FMI, with a magazine dedicated to the Italian Championship PreGP, Sp, MiniGP and Minimoto.

It is important the return of Raisport (digital terrestrial and satellite) alongside the CIV: in the days following the stages, will be heading Racing 2 to recount the highlights of the race weekend.

Prestigious confirmations come from abroad where the CIV has greatly increased its visibility television thanks to Motors Tv. The channel of reference for the engines in Europe that reaches 40 countries and more than 20 million homes, will also offer the 2013 championship in full coverage, including direct and otherwise.

The CIV is still in Indian tv Ten Sports (first sports channel with over 55 million homes) that will broadcast in full the Moto3.

Then there is the welcome landing on FX, FOX TV channel of the giant in the Middle East that will provide the highlights of the competitions.

Not less important is the focus on the web: it is confirmed the live stream, simultaneously, on the official website Civ.tv and Sportube.tv, the web TV dedicated to the sport that will enrich the proposal with a section on demand where you can review in each time the races already played.