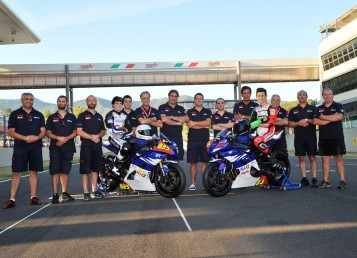 The Racing Team Elle2 Ciatti, after a 2011 full of satisfaction and success, has announced the big news that will characterize the 2012 season nearly upon us.

The Italian Championship Moto3 and the European final class in a single trial in Albacete with the new Honda NSF250R, will be the main appointments. Moreover will be added to the participation in the new edition of the Honda Trophy this year which includes the use of new prototypes Moto3.

The words of Luca Ciatti (Team Manager): “We are very happy to crown a work almost started a year ago to take the best part of the new category Moto3. We have implemented efforts to pursue a new project that we believe very much. In addition to counting on the support and technical support of the Gresini Racing, the official supplier of motorcycles and spare parts, the team worked to get on their bikes to the best equipment possible. signed partnership agreements, involving close collaboration with Ohlins Andreani-for suspensions, Dunlop covers, Akrapovic exhaust systems, Motorex lubricants, Motorcycle Parts for XP hulls, SCM for various productions.

All this work is representing a major effort for the team, with a growing use of financial and human resources, at a time of general difficulty due to the international crisis.

Luca Ciatti says at this regard: “The timing is difficult but we believe firmly in this new category and in the opportunities that can be reserved for the teams and the drivers. Although the level of competitiveness of the CIV, as I imagine, be very high, our goal is still to put our pilots in conditions to fight for the title. “

The formation in 2012 of Elle2 Ciatti Racing Team riders will be officially announced at the presentation of the team on 24 February at the Diana Park Hotel, in the beautiful setting of Lake of Nemi to the Castelli Romani.