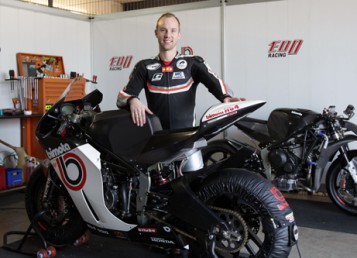 The CIV is becoming more international. After the arrival of India in 125, is ready to make his entry into the championship 2012 also the Denmark: Robbin Harms will participate in the Moto2 that riding the Bimota RDD. An important challenge for one of the major starts of the World Supersport in recent years (four championship podiums) that wants to exploit the valuable ‘stepping stone’ of the CIV to recur in the circuit champion in 2013. A few days ago, the first taste of the track Bimota HB4 2012, on which he found himself at ease right from the start. “I am very pleased to have reached an agreement with Bimota RDD – says Harms, who in 2012 also should run a few races the world – I found very experienced and professional team, with which we have done a huge amount of work, focusing particularly on the geometry of the bike. It ‘a very different from Supersport I drove up to the end of last season’s World. It ‘s a bike and a really fascinating challenge, which I think may also be a new stimulus for further progress. I really like being able to work and count on the support of the house, which has proven to bet hard on me. I am confident that it can provide valuable assistance for the development of the medium and compete for victory in every race of the season. “
To believe in the potential of Harms is also the Spaniard Ruben Xaus, sporting director of this year after a long career between Bimota Superbike and Supersport.”I know the quality of Robbin for many years, having always seen him involved in World Supersport. It ‘s a fast driver, which can further improve in the right situation. I am convinced that it will be the leading player in the CIV and possibly in the world, where we hope to deploy as soon as possible. In the coming weeks we will complete the negotiations to complete the line-up, to be at the start of the season with two drivers of quality. “