Cadalora is fan of Dakota Mamola 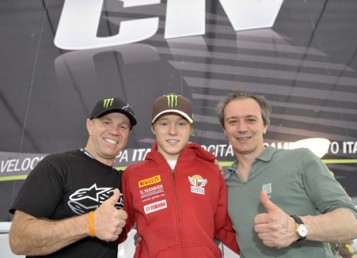 Surprise today in the paddock at Mugello, where he is playing the first round of the Italian Championship motorcycle season: in the morning arrived at the circuit Luca Cadalora, ex-world champion in the 125 and the 250 GP and vice-world champion in the 500 of 1994. The 48 year old from Modena, entered the Hall of Fame last year in the CIV for winning four Italian titles in his career, has reached the “circus flag” to meet his friend Randy Mamola: four times vice world champion in the 500 between the 1980 and 1987 riding Suzuki, Honda and Yamaha, the 53 year old Californian following year his son Dakota, to debut in the CIV in Stock 600 categories devoted to young people. In the box Yakhnich Team, including an anecdote to another, Cadalora also gave some advice to help the 17 year old son of art, that his debut on the difficult track of Mugello has closed the first free practice in thirteenth position (on 40 members), with 1’58 “876.”Something of DNA is there because at the debut was able to run on really good time -said Luca- not easy to find just the right lines on this track and it is not easy to run in CIV with all these riders but I seems Dakota very focused and sure of his means. I hope he does well, you have fun and maybe come to our levels … “