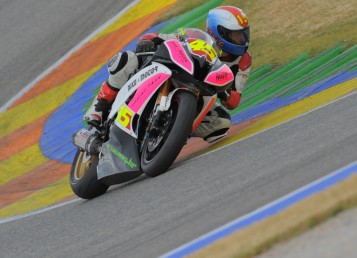 The tests at the Spanish circuit of Cartagena have been completed. Tedy Basic and the team are more than satisfied with the time considered highly important times recorded by the young Croatian. 1.37.823 was the fastest time, confirming a fruitful work of the team and the pilot in the days of testing available. He thus returns to Italy with an enthusiasm that will allow the team to continue working in the right direction in view of upcoming commitments Italianand European championships.

Tedy Basic, show his happyness and says: “I am happy because in addition to the lap times I worked always with confidence. This morning I went out on used tires and despite that I have consistently shot in 1.39. In the afternoon, together with Stefano and Alessandro,  we further refine the setup of the bike with new tires. I enjoyed very much also because the changes have allowed me a very good pace during the practice sessions. Tonight we return to Italy, but I can not wait ‘forward to getting back in the saddle. “

7 February 2012 – The team has concluded three days of tests in the circuit of Valencia, where the new signing Tedy Basic rose for the first time on yamahablack-purple, in view of the competitions 2012: CIV STK 600 and 5 stages of the Championship European Superstock 600.

The twenty-year old Croatian pilot has shown from day one, a strong determinationand regularity in the methods of work that led him to get a time of 1’41 .9, despite adverse weather conditions and new bike and team.

Alexander Mazza, team manager of the Bike and Motor Racing “We are pleased with the work that we carried on with Tedy in these three days. The cold temperatures and strong winds did not deter Tedy, the times recorded show the correct direction in which to continue the work just begun here in Valencia. We’ll continue to prepare ourselves in view of the commitments that we expect in the coming months, we believe in Tedy and together we will build our ambitions. “

Basic Tedy shows his enthusiasm, “I want to be very concentrated to the beginning of the season. With Stefano and Alessandro Mazza I was immediately very well, there is a climate of absolute serenity and this allows me to work in progress as happened here in Valencia. the 2012 season is busy and I want to do well, the bike is ok”.