At 1.50pm everybody on the couch to watch the CIV 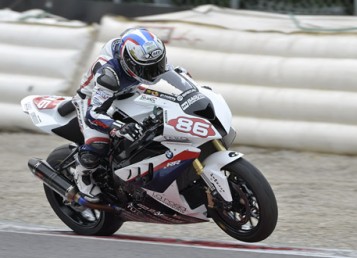 Today at Monza the qualifying sessions were disputed and the starting grids of the 2010 Campionato Italiano Velocità second round were determined. The very awaited round 2 of the Italian Championship will be live broadcasted tomorrow at the same time of the MotoGP challenge: Sportitalia 2 (channel 226 Sky, DT and live streaming) will put on air the Superbike, 125 Gp and Supersport races starting from 1.50pm; whilst Nuvolari (channel 218 Sky and DT) will broadcast the Stock 600 and Stock 1000 challenges from 4.45pm.

FIVE POLES FOR FIVE DIFFERENT MACHINERIES – The leader of the Superbike standings, Stefano Cruciani, rode the Ducati of the Barni Racing Team till the first spot (his time of 1’45”191 was the best one). Behind Cruciani, with a tenth of a second gap, there were Danilo Petrucci (Kawasaki – Team Pedercini) and Federico Sandi (Aprilia – Gabrielli Michelin R.T.). The front row was rounded off by Alessandro Polita, followed by Pellizzon, Borciani, Aldrovandi and Brignola.

French man Fabien Foret (Kawasaki – Team Lorenzini by Leoni) clinched the best time in the Supersport courtesy of the time of 1’48”920 set in the second session. The famous wild card left behind young Roberto Tamburini (Yamaha – Bike Service R.T.), series leader Ilario Dionisi (Honda – Scuderia Improve), whilst the only Triumph bike on the grid will be Mirko Giansanti’s one, member of the Padova Motocorse Team. The second row went to Velini, Ciavattini, Migliorati and Vizziello

After the great Vallelunga race, Mattia Tarozzi was the fastest in the 125 Gp qualifying session through the time of 2’00”947. The Faenza Racing representative, who challenges on board an Aprilia machinery, prevailed on Alessandro Tonucci (Aprilia – JuniorGp Racing Dream) and on the Grillini Bridgestone Team duo Nicolas Stizza and Massimo Parziani, on board Aprilia. They were respectively followed by Morciano, Popov, Gondo and Ono.

Home rider, Lorenzo Zanetti, did a great start in the Stock 600. The TNT Racing Team representative, on board Yamaha, set the time of 1’51”387 being today’s fastest, followed by Fabio Massei (Yamaha – Team Piellemoto), Dino Lombardi (Yamaha – Martini Corse) and the Bike and Motoracing Team fellow Riccardo Russo.  The second row of the grid will be featured by Gregorini, Sancioni, Lorenzetti and Mercado.

Another wild card coming from the World Series (FIM World cup) ruled the Stock 1000: courtesy of the time of 1’45”462, Ayrton Badovini was the author of the pole position on his BMW of the Motorrad Italia Team. Badovini was faster than Michele Magnoni (Honda), Ivan Goi (Aprilia – TRD Racing Cavazzin) and Domenico Colucci (Ducati – Barni Racing Team). They were followed by Conti, Petrucci, Verdini and Beretta.

HERE IS THE MOTO2 – Whilst the CIV riders were fighting to get the best positions of the starting grid, the Grillini Team presented the GAPAM 201 GP machinery, the Moto2 made by the team itself and which will be brought to the track in Spain by Gianluca Nannelli. “The FMI pays attention to innovations and the CIV must also be a launching pad for testing – stated Alfredo Mastropasqua the FMI Road Racing Area manager – that’s why we are paying attention to the Grillini Team adventure. We will support Gianluca Nannelli and the spread of Italian technology in Europe as well”.

TOMORROW’S PRESENTATION – After the Grillini event, there will be other two important events. Tomorrow the All Service System by QDP Team will introduce riders and team to journalists, at 11am in the press room. At 12pm, Pirelli will present the latest novelty about Hypersport tyres in its hospitality. The presentation will be followed by an interesting quiz through wich people could win nice Pirelli gadgets.

THE SESTI PRESIDENT’S GREETING (FMI) – “The CIV will be hosted in one of the most famous World circuits, which is often the theater of epic duels among amazing riders. The wish is that the Monza magic atmosphere will contribute to the creation of a high level show. In the case somebody won’t be present, I want to remember the opportunity to follow the races live broadcast on tv through the images broadcasted by the several tv stations of the FMI package”.

THE WEB SITE – The races commentaries, the news from the paddock and the interviews to Sunday’s protagonists will be available on www.civ.tv, where it will also possible seeing the races live timing.

TIMETABLES, TIKETS AND PRICES – Sunday’s race program will begin at 10.55am, when the first Yamaha R Series race will kick off. The CIV challenges will start at 2pm with the Superbike, followed by the 125 Gp, Supersport, Stock 600  and the Stock 1000 at 5.50pm. Free paddock entrance in the CIV paddock on Saturday, whilst Sunday’s ticket will cost € 20 (€ 15 for FMI card holders, people under 18 and women; free entrance for children under 14).