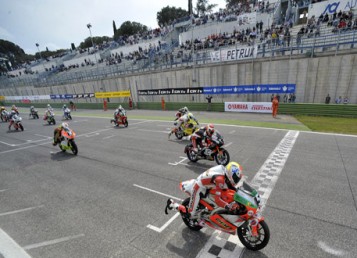 Rome April 18th 2010 – This afternoon, in front of the crowded bleachers of the “Piero Taruffi” circuit of Vallelunga, more the 150 riders challenged in the five categories of the first round of the Campionato Italiano Velocità, organized by the Italian Motorcycling Federation.

SURPRISING SUPERBIKE – An insane dog fight took place among four riders. Alessandro Polita, Stefano Cruciani and Marco Borciani, with debutant Federico Sandi, gave birth to a thrilling Superbike race on the Vallelunga circuit. At the end, the success was grasp by the Barni Racing Team, which saw its two representatives in the first two positions. The moment that decided the race was the overcome of Cruciani (Ducati n. 12) on Polita (Ducati n. 53), at the Soratte turn during the fourteenth lap. “It was hard – stated the Stock 1000 defending champion – the others were pushing hard at the start, whilst I was dealing with the tyres to make the difference at the end. I want to say thanks to everybody, I’m happy”. The 20-year-old Federico Sandi (Gabrielli Racing – Aprilia n. 23) ended in third place, very close to the former riders, at his debut in the Superbike.

125 GP: THE MAGNIFICENT THREE – Two young Italians and the rider revelation of the sessions ruled the 125 Gp race. Mattia Tarozzi, Alessandro Tonucci and Japanese Toshimitsu Gondo monopolized the challenge and the podium, making fans live an amazing finale. The 19-year-old Tarozzi (Aprilia n. 7) tried to make it untill the end, but Alessandro Tonucci already earned some useful meters for the first seasonal victory. “We knew that we had a great race pace, since yesterday – said the Junior Gp Racing Team member – I’m happy, because after losing it many times in 2009, the victory has come. I want to say thanks to the FMI, Aprilia, my Team and the sponsors. I still can’t believe it..” Tarozzi was seized by joy as he conquered the first Italian podium courtesy of the second spot, whilst the third place went to Gondo (Aprilia n. 52, Grillini Bridgestone Team).

MONTELIBRETTI CELEBRATING WITH DIONISI IN THE SS – The Supersport race was ruled from the beginning till the end by Ilario Dionisi (Honda . 57, Improve Racing Team), who celebrated in front of his home crowd. The 26-year-old  from Montelibretti did a solid start by pulling away and winning the first round of the season. “We pushed hard since Friday and the Team did a great work – stated Dionisi – I kept an eye on Tamburini who wasn’t giving up anyway, and I want to entitle my victory to my staff and their passion”. The only one who tried to keep the rithem of Dionisi was Roberto Tamburini, who ended with a 1 second gap from the winner. Behind them, four riders were involved in a bagarre at the fotofinish for the third podium spot: Diego Ciavattini (Honda n. 73) made it on board a “home made” bike.

ROME DOMINATE THE STOCK 600 THROUGH MASSEI – It was the photocopy of the Supersport challenge. In this case, “Dionisi” was substituted by Roman Fabio Massei. The rider of the Pielle Moto Team, challenging on board the Yamaha n. 34, performed in the first laps keeping an impressive rhythm, which allowed him to get almost a 5 second advantage on rivals. “I knew I had a better race pace compared to the others – said Fabio – the aim was starting and pulling away to feel quiet about the tyres at the end of the race and to deal with the advantage. I want to say thanks to my Team, who placed a perfect bike at my disposal. I hope to repeat myself next time”. In the Stock 600 as well, a dog fight took place for the other two podium steps. The fastest was Zanetti (Yamaha n. 8 – TNT Racing), who was the second to take the chequered flag in front of Dino Lombardi (Yamaha n. 13, Martini Corse).

GOI-BUSSOLOTTI, WHAT A DUEL IN THE STOCK 1000 – Only a tenth of a second divided the Stock 1000 winner, Ivan Goi, from second classified Marco Bussolotti. The two hardly fought during all the 13-lap race, inflaming the Roman crowd. First victory of the season for the 30-year-old from Mantova representative of the TRD Racing Cavazzin (Aprilia n. 12). “We had a good performance since Thursday, and we used both tyres – stated Goi – at the end I chose the hardest and it worked well all the same. I noticed I was the fastest and I overcame Marco, with six laps to go, heading the field till the end”. It was the first podium of the season for the 19-year-old Marco Bussolotti, whilst Danilo Dell’Omo (Suzuki n. 9, Suriano Racing Team) classified in third. Matteo Baiocco (Kawasaki n. 15, Pedercini Team) and Marco Muzio (Honda n. 77, Improve Team) finished among the first five.