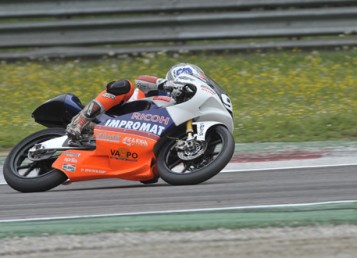 Miroslav Popov said goodbye to everybody at the start to pull away for a solitary race till the chequered flag. The 125 Gp Mugello race was literally ruled by the Czech rider, who rode a perfect race on board the Aprilia of the Ellegi Racing Team, despite the challenge started with wet track conditions and finished with dry track. The foreign challenger, disputing the Italian race, kept the most constant pace at the 12-laps race. Popov is now at the head of the Championship standings since he conquered 25 points.

“The race was a cool one – said Miroslav – even if it followed two tough days: finding the right set up had been very hard and that’s why I want to thank my team who worked really hard. I’m expecting a similar result on Sunday too..another victory would be fantastic”.

Francesco Mauriello, rider of the Matteoni Racing Team, was happy as well as he was able to conquer the second spot of the podium at the end of a thrilling battle with Kevin Calia’s on board his Rumi. Mauriello prevailed on rivals right under the chequered flag, with a tenth of a second advantage. “The race was amazing but at the sixth lap the rear tyre was worn-out so that I just managed the advantage over Calia and the others till the chequered flag – declared Mauriello – on the big day I’ll try to win because my aim is grasping the Italian Title”.

Calia was third classified, and reached the first podium of the season on board the 125 Gp Team Rumi machinery. “It has been a tough weekend  – explained the former Rookies Cup rider – the first bike was not working so that I used the second one for the race. I enjoyed myself very much even if at the end the bike was slipping on the dry track. It’s okay like this, I’m very happy with this podium”.

Armando Pontone (Aprilia – Junior Gp Racing Dream) classified right off the podium in fourth position in front of Hiroki, Stirpe, Fenati, Antonelli, Gondo and Parziani. Debutant Tatasciore, who used to challenge in the Coppa Italia, substituted Morciano and finished in twelfth, whilst Alessandro Tonucci’s race was disappointing somehow as he was only fifteenth. Bonati, Giorgi and Tarozzi crashed: the latter retired at the sixth lap whilst he was struggling for victory.

The leader of the point standings is Popov with 44 points, followed by Mauriello (40 points), Tonucci (39 points) and Pontone (37 points).